Elise Winn Pollard grew up devouring James Herriott books in a home shared with, at one time or another, cats, iguanas, gerbils, cockatiels, rabbits—and one dog—and planned to become either a writer or veterinarian. Writer won out, though she’s continued to surround herself with animals, and they often make an appearance in her fiction.

After earning her MA in creative writing at UC Davis, Elise taught writing classes in the community and at UC Davis and served as creative director and co-director of Stories on Stage Davis. She joined the Koret Shelter Medicine Program as an administrative assistant in October 2020 and is excited to deepen her knowledge of the animal welfare field while supporting the all-star KSMP team and its innovative work. 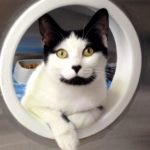